In 2011, we noticed that many of the parents at The Seattle Girls’ School (an independent middle school in the Central District of Seattle) were becoming increasingly concerned about how to handle their students’ social media usage. The administration at the school decided they wanted to help parents navigate this increasingly sticky issue and we offered to help.

We began by designing an anonymous survey that was given to each of the students at the school, asking about the kinds of social media they use, how often, and what they used it for as well as their understanding of online privacy and risks associated with social media use. Students were also offered the opportunity to expand on any answers they wished to. The data was broken down by grade level.

We shared the survey results with parents and staff at a roundtable discussion event and highlighted areas of concern and trends we noted. Many parents were surprised at the level of online usage the children reported and it became clear, in this instance, that many of the students had a false or incomplete understanding of their relative amount of privacy online.

Note: The students at the Seattle Girls’ School range in age from ten to 13. The survey is relevant for both middle school and high school student populations.

Offering students, parents and educators practical tools to increase resilience, build stronger relationships, and tackle tough challenges. We work with schools, parent groups, and civic organizations. Whether it's a workshop, ongoing trainings or one-time speaking engagement, we can help.

“One Teenager at a Time: Developing Self-Awareness and Critical Thinking in Adolescents” 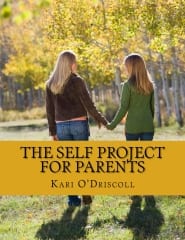 Need help parenting your teen? I’m happy to help in person or via Skype. We can target your biggest concerns and talk about ways to build a stronger, more purposeful relationship with your child. Email kari@theSELFProject.com for rates and information.

If you would like to host a workshop or training, or just want a speaker for your event, email kari@theselfproject.com