Don’t disagree with anyone for an entire day. (pick a day when you don’t have to be at school or work because many of these interactions rely on you speaking up and offering new perspectives)

You might ask why this is considered a mindfulness exercise and here’s what I would say: anything that causes us to stop and really question our habitual reactions to things we encounter a lot is mindfulness in my estimation.

So can you do it? Can you spend an entire day noticing when your instinct is to rebut someone’s statement or explain why your idea/belief is better and tamp that down? Can you hear the voice in your head saying “that’s not true” and keep it from coming out of your mouth? Can you pay attention to how often it happens in any given day and dig a little deeper to discern what your body’s response is? Does your jaw tighten or your belly clench?

As the day wears on, does it get easier or harder? Are you storing up arguments to use tomorrow or are you learning something. Notice what happens to the quality of your interactions with people around you when you don’t automatically respond with a clarification or a rebuttal.

I’m not saying that you should never disagree with anyone. In fact, I think that the hallmark of good relationships is the ability to hold different viewpoints and still maintain connection, but many of our interactions with other people are more like competitions or power plays than they are about learning and exploring new ideas. Maybe at the end of a day spent agreeing with everyone around you, it will be easier to discern when it is important to speak up and disagree. Many of us have become conditioned to try and prove our point whether it really matters or not, and it is my hope that this exercise will give you some insight in to whether that is true of you.

I’d love to hear how it goes in the comments. 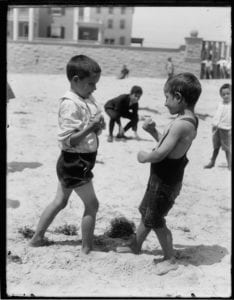 Most of us can think about how conflict is different from disagreement. We have folks we can peacefully disagree with on certain issues and it doesn’t affect our relationship. But what is it that turns a difference of opinion in to an outright argument or nasty fight?

When we’re in a philosophical discussion with someone else about a particular issue, if we don’t let our emotions take over, we are generally able to have a conversation that allows for different ideas. But as soon as we start to feel personally attacked or fear that the other party is going to try and force us to act in a way we don’t want to, things get ugly. There are two things at play here. The first is the way our brains work.

When the emotion centers of our brains begin to really activate, the part of our brain that reasons goes quiet. In addition, when we are strongly emotional, we are literally unable to process auditory input (listen) as well. We stop being able to listen when our emotions take over. That’s a problem when we are having a discussion with someone whose ideas are very different from our own because in order to have a productive exchange, everyone needs to feel heard. At this point, it’s pretty hard to learn from the other person and generally, we let things devolve to a point where the objective becomes winning instead of learning. when we let adrenaline take over, we are afraid to lose. That leads us to the second issue of power.

If the goal is winning, you’ve opened the door to a power struggle and whichever person is louder or more tenacious or had more power in the first place is likely to prevail. This is a particular problem when it comes to difficult discussions between parents and teens or teachers and teens because the adult in the situation almost always starts out in a position of power, whether they acknowledge it or not. And when you’re faced with a power differential, it’s a safe bet that there will be conflict instead of disagreement. The person who is at a disadvantage will always have that niggling fear in the back of their mind that what they say doesn’t ultimately matter because they don’t have enough influence. They may also be afraid to be completely honest because of the repercussions that might come. Will they be grounded? Have their phone or car privileges taken away? Be put on academic probation or suspension?

So, what now? Here are some tips for either de-escalating from conflict back to disagreement or for preventing conflict in the first place when you know there’s a difference of opinion with a teen:

Adolescents need their relationships with adults to evolve over time to give them more power and to listen more. Not only does this help them become more independent, but it models for them how to have adult conversations about difficult topics, and it empowers them to honor their own perspectives and ideas. By the time they get to college and/or the workforce, they will need to have the skills to have disagreements without turning them into conflict.