Adolescence is a unique time in human development, not only physically but mentally. The adolescent brain is growing and changing rapidly, both “pruning” old connections and pathways to make things more efficient, and building new neural “superhighways” that will become used almost exclusively for the rest of an individual’s life. Many of us form thinking patterns and habits in our adolescent years that will either serve us well or prove hard to break as we get older. Because of this, it is very important to make sure that the way we see the world and interact with it during adolescence takes advantage of this growth and development.

Using social-emotional education techniques that encourage broad connections and integration of information can help students during adolescence. Think about the most important moments in your middle or high school education. They weren’t likely related to a particular set of data you memorized for a test (in fact, most of that information is long gone, having only been stored in your short-term memory until the quiz or test was over). The things we recall the most, that had the most impact on us, were the “a-ha” moments. They represent the times we truly understood why something worked, when we were able to make connections between two or more ideas or facts and see the patterns. Understanding patterns and formulas is not only academically rewarding because it allows us to extrapolate further and predict things, but it actually causes a release of dopamine (the “feel-good” chemical), which further imprints that concept in our minds.

Adolescence is a time of neural integration, a time when we are driven to seek connections like that and begin to have a deeper and wider knowledge of the world around us. When we can draw parallels between different subjects and use our own creative thought processes to imagine still more connections, we are rewarded by feeling good. It is this phenomenon that spurs still more independent learning and creates a passion for understanding in the adolescent student.

Adolescents are also particularly socially driven – preferring to spend time with peers more than anyone else. They seek connection almost constantly and work to identify groups of individuals with whom they feel they can “belong.” These people become the single most influential force in most teens’ lives.

A good adolescent SEL program takes advantage of both the brain development and the social drive of teens through student-led exploration of diverse ideas within a community of their peers in order to reinforce the building of neural superhighways that will make rapid integration of new material and creative problem-solving easier as they reach adulthood.

Can We Stop Telling Kids We Want to Teach Them to “Manage” Their Emotions? 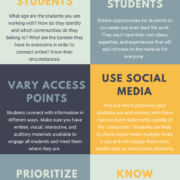 SEL and Online Learning: Some Tips

Learning Doesn’t Only Happen in Class